What exactly is the issue?

“Of all the forms of inequality, injustice in healthcare is the most shocking an inhumane” 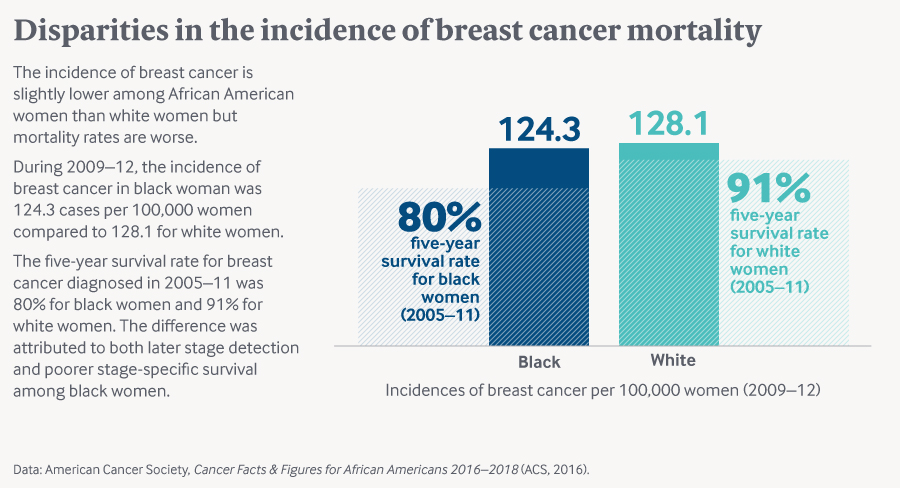 As illustrated by the infographics, there has been a large gap in healthcare

in Atlanta between the Black community of patients and the White community of patients especially emphasized in terms of cancer. According to a Cancer Epidemiology study in 2016, With 44 black patients per 100,000 residents dying compared to the 20 white patients per 100,000, Atlanta has the largest disparity in breast cancer mortality. Topping the charts again, Atlanta’s prostate cancer mortality for black men is the highest with 49.7 deaths per 100,000 residents compared to the 19.3 per 100,000 residents for white men. Even on the grander scale of life span, predominantly black neighborhoods have 12 years or greater gaps in life spans compared to white neighborhoods according to the Virginia Commonwealth University’s findings. Moreover, these findings consist in terms of treatment of diseases such as HIV, stroke and diabetes (Anderson).

Austin Gilmore, 60 years old. Gilmore has a successful roofing business, house, and wife until he unfortunately lost her to kidney disease in 2011. Without insurance, his spiral of depression and alcoholism left him in a harsh position in terms of finding medical care to treat his addiction. Luckily, he was able to become connected with a non-profit agency known as Mercy Care which offered treatment regardless of his economic or racial background. Stories like Mr. Gilmore’s serve as an inspiration for the field medicine in which healthcare should actively foster a safe haven regardless of a patient’s circumstance with regard to social status, religion, sex, or race (Anderson).

My Call for Action:

My purpose behind pursuing this project is to inspire future health professionals, lawmakers, and contributors to our community to become more conscious of the implicit biases even in a career that is appears as concrete as the biological sciences or public policy. I urge you, the readers, to take an active role in your judgements of others whether that be based on race, religion, gender, or any other differentiating characteristic besides the morality and rights that each patient has for healthcare.

Educate Yourself: Good news! By clicking on this page, you have already begun this step. Recognize the racial issues in your own community. Trust me, it is worth a Google Search to understand your city’s racial issues. Here are some resources to read in order to continue combatting your own biases:

Ways to Be Conscious of Your Unconscious Bias

Engage: I recognize that this issue is not one that should be handled lightly. Racism has systematically impacted daily routines and opportunities for generations, especially in the South of the United States. However, it is up to us to change this lens. I urge you, future health professionals, to be compassionate in your approach to healthcare. Don’t be discouraged by fear or walk on eggshells. Be empowered to spark conversation and play an active part in breaking down the walls surrounding racial biases in medicine.

Build your own diversity statement. Let’s start some conversation recognizing our racial differences. Think about how your physical appearance has led to discrimination in your daily life and what you dialogue you wish would have been exchanged instead. Let’s cultivate a safe space for some open conversation in order to practice empathy and grow more comfortable discussing racial issues.